About The Cowboy Fast Draw Association

You might say this all started in 1873 with Colt's release of the Peacemaker. In the era of 1873 through the 1890's, the Romance and Legend of the American West was unlike any other culture in the world; this time period is the premise for Cowboy Fast Draw. We use the best equipment available of the 1800's: single action revolvers and center fire cartridges. We're out to capture the feel of the Peacemaker in your hand, the smell of holster leather, and the exhilaration of reacting as fast as you dare while remaining cool-headed enough to hit your mark as you compete head to head in classic old west fashion. In Cowboy Fast Draw we can find out how we would have shot in the 1800's with gunfighter period guns and rigs.

Cowboy Fast Draw L.L.C. is the newest and oldest shooting sport today. It is a timed sport using single action .45 caliber western style six shooters. It's as exciting as dropping the clutch on a dragster. Check out the announcements on the events page to see where you can attend a Cowboy Fast Draw competition.

Ammunition: Wax Bullets Only! .45 colt, is the only caliber allowed in Cowboy Fast Draw. This is for three reasons: #1. At major contests, the host supplies all of the ammunition and there is no way to accommodate multiple calibers. #2. Wax bullets are very light and smaller calibers would increase velocities significantly, which would create a competitive advantage. #3. Historically, the Colt Peacemaker was introduced in .45 colt and that is what our sport is based upon.

90% of Cowboy Fast Draw is done with special .45 colt casings that are modified to accept 209 shotgun primers, with no powder. These alone propel the 18 grain .45 wax bullets at approximately 650 feet per second. Therefore, they must be handled with extreme care. In CFDA Titled Championships, Cowboy Fast Draw Cartridges are usually supplied in .45 colt casings with a small charge of Hodgdon Triple 7 Black Powder Substitute, they are carefully loaded by CFDA approved personnel to move just slightly faster than the Shotgun Primer loads.

We have 6 targets that drop down from the ceiling for use and some cowboy cutouts.

RARGC purchased new timers and hit sensors through a grant in Dec 2018 since some timers didn't work anymore and have become obsolete.

Click here to see pictures from the 2019       Rosebud Renegades Shoot.

These are our new Fast Draw timers. 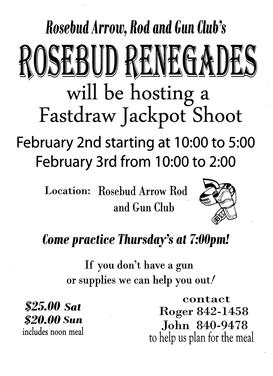